Petroleum Geology and Hydrocarbon Potential of the Yenisei-Khatanga Trough

This report covers the petroleum geology of an area of Northern Siberia north of the Central Siberian Plateau, from the Gyda Peninsula in the west to the coast of the Laptev Sea in the east, and including the Yenisei gulf/estuary, the Taimyr Peninsula and Yenisei-Khatanga Trough.

All maps are georeferenced and are available in ArcGIS format. The report covers the following geographic areas:

Gyda Peninsula
This forms the western end of the area of study, and is also covered in Blackbourn's regional study on "The Petroleum Geology of Western Siberia". More detailed stratigraphic and palaeogeographic data are now available, including significant new data on hydrocarbon-source characteristics.

Taimyr Peninsula
The Peninsula is composed of Precambrian to Mesozoic accreted terranes, and most of the available data are on the plate-tectonic and structural development of the area. There are some Mesozoic sedimentary systems incorporated within the Taimyr structures, for which some limited prospectivity has been claimed. Sufficient stratigraphic and structural data are available to provide an initial assessment of the likely prospectivity.

Yenisei-Khatanga Trough
This trough runs from around the Yenisei estuary in the west to the coast of the Laptev Sea in the east, bounded by the Taimyr Peninsula in the north and the Central Siberian Plateau in the south. It is divided into a series of sub-basins, a number of which have a substantial, mainly Mesozoic, fill, and are associated with hydrocarbons (primarily gas has been discovered to date). There are a variety of different names for the various sub-basins, including:

The report is available now at a cost of US $20,000. Companies purchasing this report together with Blackbourn's report on the Laptev Sea may do so for a combined price of US $30,000. 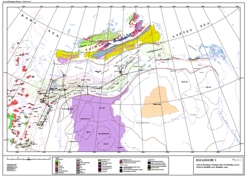