This report considers the petroleum geology of Eastern Siberia, an area broadly equivalent to the Siberian Platform lying between the Yenisei River in the West and the Lena River in the East, but including the parts of Pre-Verkhoyan and Eastern Aldan to the east of the Lena.

Eastern Siberia is relatively under-explored and under-developed. Although it is unlikely to be as prolific a producer as Western Siberia, world-class gas and oil accumulations are present, in addition to vast though problematic bitumen resources. The importance of Eastern Siberia as a hydrocarbon province is likely to increase significantly.

Part I of Volume I of the report begins with a short overview of the geography, geology and exploration history of the area. The remainder of Part I comprises a systematic description of the geological history of the area, beginning with its tectonic development since the Proterozoic when the platform comprised the Siberian continent. This is followed by a review of the stratigraphy and palaeogeography of the Platform and its individual components. Part II of the report considers the petroleum geology of individual sectors of the Siberian Platform.

Volume II of the report, is formed from the relevant sections of Blackbourn Geoconsulting’s Field Database of the Oil & Gas Fields of the Former Soviet Union, with data on over 100 fields broken down where appropriate into their separate accumulations.

The report is available to purchase now at a cost of US $26,000. For further details, please contact Dr Graham Blackbourn.

Note: The database includes the fields of the Yenisei-Khatanga Trough, which underlies the North Siberian Lowland. Although this trough is sometimes regarded as part of Eastern Siberia, it is not considered in detail within this report as it is the subject of Blackbourn Geoconsulting's Yenisei-Khatanga study. 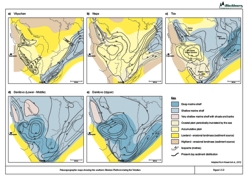 Palaeogeography of the southern Siberian Platform during the Vendian 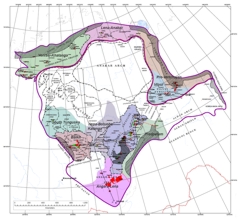